Bay Area-based Rapid Robotics today announced a $12 million Series A. The new round, led by NEA, brings the company’s total funding up to $17.5 million. It joins a recently closed seed round, announced way back in November of last year. Existing investors Greycroft, Bee Partners and 468 Capital also took part in the round.
We noted at that stage that COVID-19 had a sizable impact on robotics investment. At the very least, the pandemic has served to accelerate interest in automation, as many “non-essential” workers have been unable to travel to their jobs. At present, manufacturing jobs often lack the ability …

While it’s true the VC world has gone SPAC-happy, the reverse merger method hasn’t been a huge driver in robotics thus far, with some notable exceptions like Berkshire-Grey. This morning, however, Utah-based Sarcos Robotics announced plans to board the SPAC train, courtesy of Rotor Acquisition Corp.
The deal could potentially value the robotic exoskeleton maker and blank check co. at a combined $1.3 billion, along with a potential $281 million earn out. Sarcos is, of course, one of a number of companies currently exploring the robotic exoskeleton category. So, what sets the company apart, beyond some heavy-duty James Cameron-style design …

NASA’s SBIR program regularly doles out cash to promising small businesses and research programs, and the lists of awardees is always interesting to sift through. Here are a dozen companies and proposals from this batch that are especially compelling or suggest new directions for missions and industry in space.
Sadly these brief descriptions are often all that is available. These things are often so early stage that there’s nothing to show but some equations and a drawing on the back of a napkin — but NASA knows promising work when it sees it. (You can learn more about how …

For obvious reasons, food delivery was among the categories that soared during a year of Covid-19 related lockdowns. The question remains how these changes will impact both grocery and restaurant delivery long-term, but at the very least, it seems certain that the categories have hit an inflection point.
This could also be the moment that delivery robotics finally come into their own, as more services look beyond human messengers to plan for future pandemics and other potential issues.
It’s a moment Starship Technologies has been planning for since 2014. With around $100 million of funding under its belt, the company has …

We’ve got the details on Boston Dynamics’ upcoming warehouse robot Stretch, Apple releases security patches and Cazoo is going public via SPAC. This is your Daily Crunch for March 29, 2021.
The big story: Boston Dynamics shows off its next commercial robot
Boston Robotics continues its transformation from research organization to commercial robotics company: Stretch is the company’s commercial version of Handle, a wheeled robot that could navigate around objects and pick up a 100-pound crate. With Stretch, the wheels have become less prominent, while the team has added a “perception mast” that allows the robot to see while it …

Soft robotics have long been one of the more exciting categories among emerging technologies. Of course, as with most new tech, the field has some drawbacks over more traditional models. While they improve flexibility and complains over their more rigid counterparts, robots made of soft materials have often had an issue delivering electrical connectivity. In many cases, water and air-filled bladders are used to helped facilitate movement.
New research out of Carnegie Mellon University points to a method that could help increase conductivity in soft materials like hydrogels, without compromising the compliance at the core of the material’s appeal.
…

Fort Robotics today announced a $13 million raise. Led by Prime Movers Lab, the round also features Prologis Ventures, Quiet Capital, Lemnos Labs, Creative Ventures, Ahoy Capital, Compound, FundersClub and Mark Cuban.
The Philadelphia-based company was founded in 2018 by Samuel Reeves, who previous headed up Humanistic Robotics. That fellow Pennsylvania startup is focused on landmine and IED-clearing remote operating robotic systems.
The newer company is focused more on safety software, for collaborative robotics and other autonomous systems. Among the other issues being tackled by the company is cybersecurity vulnerability among these sots of workplace robotics. Other issues targeted here include broader …

So, this is going to sound like a cop out (because, honestly, it kind of is), but the through line for the past week’s robotics investments is variety. That is to say that this week’s round of funding is all over the place, in terms of verticals, which is probably an overall positive sign of the health of robotics investing in general. VCs seem to be pretty bullish about automation across a variety of different sectors.
Medical continues to be a biggie. What’s wild about surgical robots is how long they’ve actually been in practice. The … 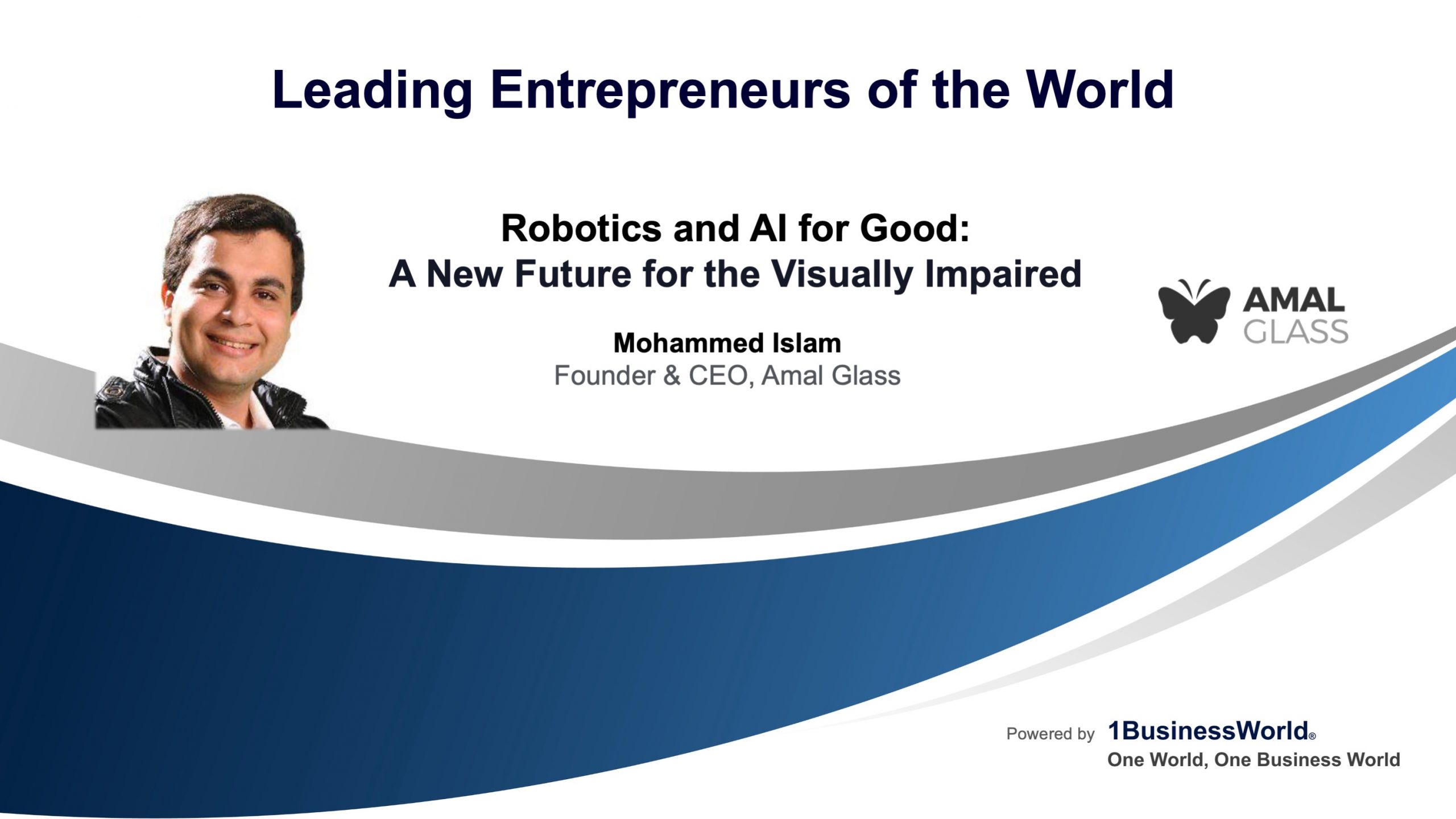 Robotics and AI for Good:
A New Future for the Visually Impaired 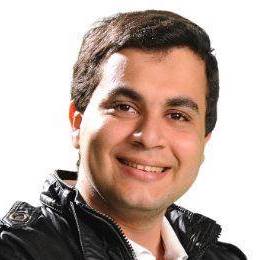 Mohammed Islam Hashem is the CEO and R&D Manager of Amal Glass. Mohammed is an artificial intelligent engineer and a computer and information science graduate. Since 2009, he has developed many AI and image processing algorithms for robots and machine learning. In 2010, he developed an artificial intelligence-enabled humanoid robot that could walk and recognize the environment, avoiding obstacles. He then asked himself what was the need of developing and updating robots when there were humans in need of this technology more than robots! So he switched all his researche and development towards assistive technology for blind and visually impaired people which was the birth of Amal Glass. Today the eyeglasses the company makes can read books, recognize currency, recognize signs, recognize human faces, identify obstacles, and provide GPS services which enable blind people to be independent and integrate with the community. In addition, the application store enables users download new applications or update existing ones.

The idea started with the creation of an intelligent robot that can identify the environment and movement without collision and sensing the obstacles around it, which was the field of study and specialization of Engineer Mohammed Islam.

And then, the idea turned from spending the effort and time in the manufacture of a robot to make this robot serves humanity and harness all of its potential to be a support to the human being rather than be a luxury and after many research, we found the most needy people are those with special needs.

Work has begun to turn this robots robot since 2010 into smart glasses that serve the blind. Hence the idea of Amal smart glasses began. After much research, we found that many blind people need a personal assistant and some may be isolated from the outside world.

We have been working in Amal glasses to harness all our potential to make these glasses after Allah is the personal attendant that can provide all the needs of the person who lost the grace of sight, Allah willing, without the need for anyone and help him with his needs and fully integrate into the society.

Good robots don’t die — they just have their assets sold off to the highest bidder. Digital Dream Labs was there to sweep up IP in the wake of Anki’s premature implosion, back in 2019. The Pittsburgh-based edtech company had initially planned to relaunch Vector and Cozmo at some point in 2020, launching a Kickstarter campaign in March of last year.
The company eventually raised $1.8 million on the crowdfunding site, and today announced plans to deliver on the overdue relaunch, courtesy of a new distributor.
“There is a tremendous demand for these robots,” CEO Jacob Hanchar said in a release. “This …