Pantone, the color registry company, has introduced a new shade — Period red — that it hopes will get people talking about a part of life that often goes unmentioned.

By focusing on menstruation, Pantone said, it wants to overturn a taboo and draw attention to a regular life phase with a color that is “energizing” and “dynamic.”

Period red “emboldens people who menstruate to feel proud of who they are,” said Laurie Pressman, vice president of the Pantone Color Institute. She added that the goal was “to urge everyone, regardless of gender, to feel comfortable to talk spontaneously and openly about this pure and natural bodily function.”

The announcement is partly a marketing stunt: Pantone has teamed up with the Swedish feminine products brand Intimina, and the brand’s Seen+Heard campaign, to help make periods just a regular part of everyday life.

But there’s no arguing that attitudes toward menstruation are outdated: The average woman has her period for 2,535 days of her life, yet it continues to be a barrier to women’s equality. In some parts of the world, women still face discrimination, miss school to manage their periods and lack clean, safe products and lavatory facilities.

And periods don’t stop for pandemics. As the coronavirus crisis ravaged global supply chains and disrupted work and social lives, women and girls around the world were struggling to find basic essentials like pads and tampons.

In recent years, businesses and governments have taken steps to combat the stigma. Zomato, an Indian food-delivery firm with 4,000 workers in 24 countries, introduced a paid period leave policy in August for employees dealing with cramps and stomach pains brought on by menstruation. In 2018, Scotland became the first country to provide free sanitary products to students at schools, colleges and universities, so girls and women will no longer have to miss studies because they cannot afford sanitary products. In early 2020, the British government followed suit.

According to Plan International UK, a girls’ rights charity, one in 10 girls in Britain cannot afford sanitary wear, and nearly half of girls ages 14 to 21 are embarrassed by their periods.

Menstrual equity is a political movement as well as a marketing effort. There are longstanding calls to abolish what is known as the “tampon tax,” or sales tax on sanitary products, in places across the United States.

Pantone is one of the most influential organizations in color forecasting and in savvy marketing, experts say, with its annual color of the year. In 2019, the pick was a “classic blue” to mirror the world’s collective anxiety and stress.

On Twitter, Period red and the statement behind it were met with praise by some and derided as virtue-signaling by others. And some raised concerns about the color match. “I’m all for ending period taboos,” one user said, “but I don’t think painting your walls Manchester United red is really the answer.”

Zareen Ahmed, founder of the Gift Wellness Foundation, a charity in Britain that provides sanitary pads to women in crisis, said anything that was done to normalize the conversation was positive.

“This is the last taboo, the last form of discrimination that is so viscerally rooted in our patriarchal, cultural DNA that even women won’t admit to it,” she said.

Gabby Edlin, founder of Bloody Good Period, a British charity that provides products for those who can’t afford them, said: “It is a P.R. stunt, but I think that doesn’t make it inherently bad. I think that’s a really interesting way in showing how far we’ve come.” 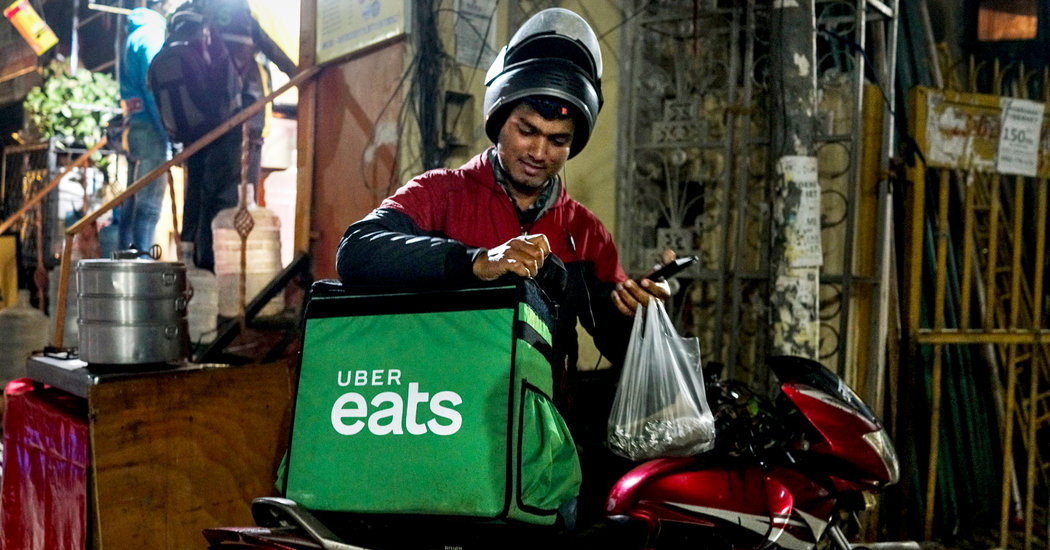 MUMBAI, India — Uber, in its latest move to drop money-losing businesses, agreed on Tuesday to sell its food delivery business in India to Zomato, a local competitor, in exchange for 9.99 percent of the Indian start-up.

All delivery drivers for the service, known as Uber Eats, and basic information about customers, including their phone numbers and order history, will be transferred to Zomato, the companies said. In addition, Uber’s app will send Indian users to Zomato for six months when they click on the “Get Food Delivery” button.

Uber has faced increased pressure from investors to turn a profit, and it spent much of 2019 cutting costs and laying off employees after a disappointing initial public offering last May. While its food delivery service, Uber Eats, has grown quickly, it faces aggressive competition around the world, and the company has been forced to spend heavily on subsidies and promotional offers to gain new users.

By selling Uber Eats in India to Zomato, Uber can cut losses while taking a stake in a start-up that was valued at $3.55 billion this month. Uber will continue to operate its ride-hailing business in the country, where it competes with a local rival, Ola.

The two local food delivery leaders in India, Zomato and Swiggy, were already well established and together controlled about 80 percent of the food delivery market. Zomato said the deal will add Uber’s 10 million in monthly food orders to its own 40 million, giving it a slight edge over Swiggy. In particular, the acquisition will bolster Zomato’s position in southern India, Swiggy’s stronghold.

Uber Eats never managed to attract many restaurants or customers in India, despite the company’s ride-hailing business. There was little synergy between the two businesses, since food delivery in India is done by motorcycle couriers, while rides are provided mostly by cars.

For the first three quarters of 2019, Uber Eats in India accounted for 3 percent of the gross booking for Eats globally and at least 25 percent of its adjusted operating losses, according to a person with knowledge of the finances who was not authorized to speak publicly.

Dara Khosrowshahi, Uber’s chief executive, told investors in a November conference call that he planned to make Uber Eats the primary or secondary food delivery service in every city where it operates. If the plan failed, “we’ll look to dispose or we’ll get out of the market,” he said.

In a statement on Monday, he said, “India remains an exceptionally important market to Uber and we will continue to invest in growing our local Rides business, which is already the clear category leader.”

Uber has recently ceded ground in several of the international markets where it operates. It pulled Uber Eats from South Korea in September and sold off its ride-hailing business in Southeast Asia to a local competitor in 2018.

Last March, Uber purchased its largest competitor in the Middle East, Careem, as a hedge against competition there. That deal has been approved by regulators in most of Careem’s markets.

For Zomato, buying the Uber Eats business in India will help it compete against Swiggy. Both companies have been raising money from investors — and burning through much of it — as they fight over the small orders that dominate India’s food delivery market.

Zomato began in 2008 as an online guide that scanned menus from restaurants. It later added reviews and reservation features, and more recently, food delivery, which is now the core of its business. Its investors include Ant Financial, which added $150 million to Zomato’s coffers in a fund-raising round this month.

To increase revenue, Zomato began a loyalty program in 2017 called Zomato Gold that gave diners buy-one-get-one-free deals at thousands of restaurants. The program, which was very popular, was initially limited to in-person dining but later extended to delivery.

Last year, hundreds of restaurants dropped out of the program in a coordinated campaign, citing large losses. The industry is still battling Zomato and other food-delivery services over what restaurateurs see as a culture of deep discounts that are ultimately paid for by restaurant owners.