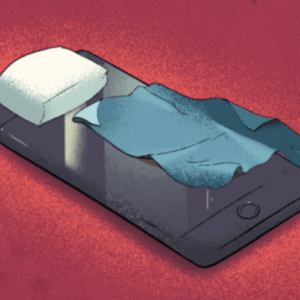 
If you’ve forgotten what it feels like to have a good night’s sleep, there is a new batch of companies that want to remind you how much their products can help.

Companies like Casper and Tuft & Needle have plastered billboards around cities touting their promises, and while mattresses have been in the limelight with Casper’s recent IPO, a slew of other products are cropping up in what’s been coined as the “Sleep Economy.”

“I think there’s much more awareness around the power of sleep and the impact of lack of sleep,” said Eric Hutchinson, co-CEO of Resident, the parent company of mattress brands including Nectar and DreamCloud.

The “sleep health” industry is estimated to be worth between $30 billion and $40 billion, and has historically grown about 8 percent each year, according to a 2017 report from consulting firm McKinsey & Co.

“Sleep in general is at a premium right now,” Gravity Blanket co-founder and CEO Mike Grillo said in an interview with Crunchbase News. “I think the notion that you could purchase a product that is demonstrated to improve your sleep is very attractive to people. It’s an easy first step.”

Gravity Blanket raised more than $4 million through a Kickstarter campaign in 2017. In addition to its signature weighted blankets, it offers products like weighted sleep masks, aromatherapy pillows, and a CBD line with melatonin and chamomile.

Most of the sleep product market in the past has been filled with pharmaceutical products, sleep aids like Ambien, Grillo said. But he expects to see more physical products that aren’t pharmaceuticals or mattresses gaining traction with consumers.

And with new markets (and potential products) comes inventiveness and fresh startups.

Gravity Blanket is pushing forward with new products and will be coming out with a line of cooling sheets, weighted apparel and a sleep serum in collaboration with a beauty company in the future.

“The mattresses have given birth to this direct-to-consumer economy … but the emergence of companies like Calm and Headspace have made wellness really en vogue,” Grillo said. Meditation apps have also attracted venture dollars, with Calm raising about $143 million in funding, according to Crunchbase, and Headspace bringing in about $75 million.

Gravity sees itself more in the space of wellness than the home space, Grillo said, and the company has collaborated with Calm for a line of weighted blankets, which includes a one year subscription to the meditation app.

Resident co-CEO Hutchinson pointed to other secondary products like pillows, sheets and adjustable bases as a growing opportunity. They’re replaced more frequently than a mattress, which typically has a life of eight to 10 years, but also important for a good night’s sleep.

The rise of the internet made information more accessible, and made “shopping for mundane products enjoyable” Hutchinson said.

And what better market than sleep-deprived consumers ready and willing to pay for some help.

Netskope, a cloud security company, has raised $340 million in a Series G round led by Sequoia Capital Global Equities.

A look at some of the mid-sized startup hubs, which despite lower amounts, keep steady pace with funding rounds.

Latin American startups, which received record-breaking levels of venture capital in 2019, are looking at Spain as a gateway to the European market.