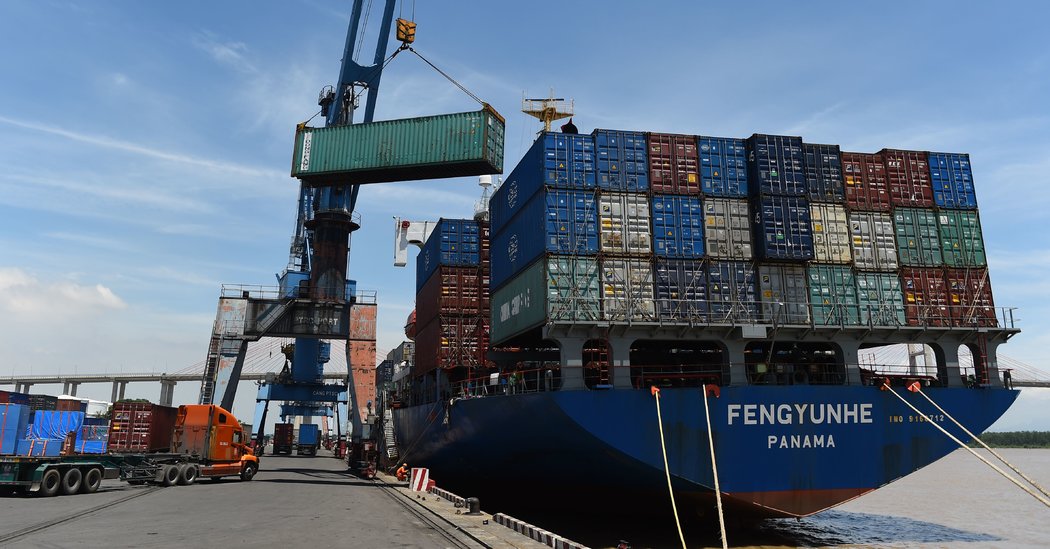 The trade deficit for both goods and services fell to $616.8 billion in 2019, down $10.9 billion from the previous year, according to data released by the Commerce Department on Wednesday.

Both imports and exports fell as American factory activity slowed and businesses and consumers felt the impact of tariffs imposed on China, the European Union, Canada, Mexico and elsewhere. Total American exports dropped $1.5 billion to roughly $2.5 trillion, while imports fell $12.5 billion to $3.1 trillion.

The most dramatic changes in trade last year occurred with China, the target of Mr. Trump’s biggest economic offensive.

The trade deficit in goods with China shrank $73.9 billion to $345.6 billion in 2019. It was the first drop on an annual basis since 2016, as both the United States and China placed tariffs on hundreds of billions of dollars of each others’ products.

American imports from China fell sharply in the final two months of the year, as companies worked to avoid tariffs that Mr. Trump has placed on $360 billion worth of Chinese goods.

Rather than bringing manufacturing back to the United States, the clash with China has caused American companies and consumers to shift purchases to other countries, like Mexico, Vietnam and South Korea instead, said Mary E. Lovely, a senior fellow at the Peterson Institute for International Economics.

“You’re going to see this rearrangement of the deck chairs,” Ms. Lovely said.

Mr. Trump has long pointed to the United States trade deficit — the gap between what America exports and what it imports — as proof that America is at a competitive disadvantage because of unfair practices by China and other countries. In Mr. Trump’s view, American businesses would be making more at home and consumers would be buying more domestic goods if countries like China weren’t subsidizing their industries and manipulating their currencies.

But economists have argued that the figure is a poor metric for measuring the health of the economy or America’s trading relationships. While a falling trade deficit can be a sign of a growing economy, the measure can fall for a variety of other reasons, many of them unrelated to trade and not all of them positive.

Speaking at an event at George Washington University on Tuesday, Janet L. Yellen, the former Federal Reserve chair, said that the bilateral trade deficit between the United States and China was “not the proper focus.”

Ms. Yellen said that Mr. Trump and some of his advisers see the trade gap “as a symptom of relationships being unfair.” But for many economists, a country’s overall trade deficit with the rest of the world just means that the country is spending more than the output it can produce itself, she said.

“Most economists think that a country’s savings and investment are decisions that aren’t affected by trade policy,” she said.

Brad Setser, a senior fellow at the Council on Foreign Relations, said that a falling trade deficit can sometimes be a sign of the kind of manufacturing boom that the Trump administration has been trying to engineer. In that case, American factory production would be rising, displacing foreign products from the American market and causing imports to fall.

But that is not the situation the United States finds itself in, he said. Instead, factory activity has been weak, and both American imports and exports have contracted, he said.

In addition, tariffs and trade uncertainty appear to have cut into business investment, slowing economic growth.

“Tariffs to date have clearly had a significant impact on imports from China,” Mr. Setser said. “They equally clearly have not led to a stronger U.S. manufacturing sector.”