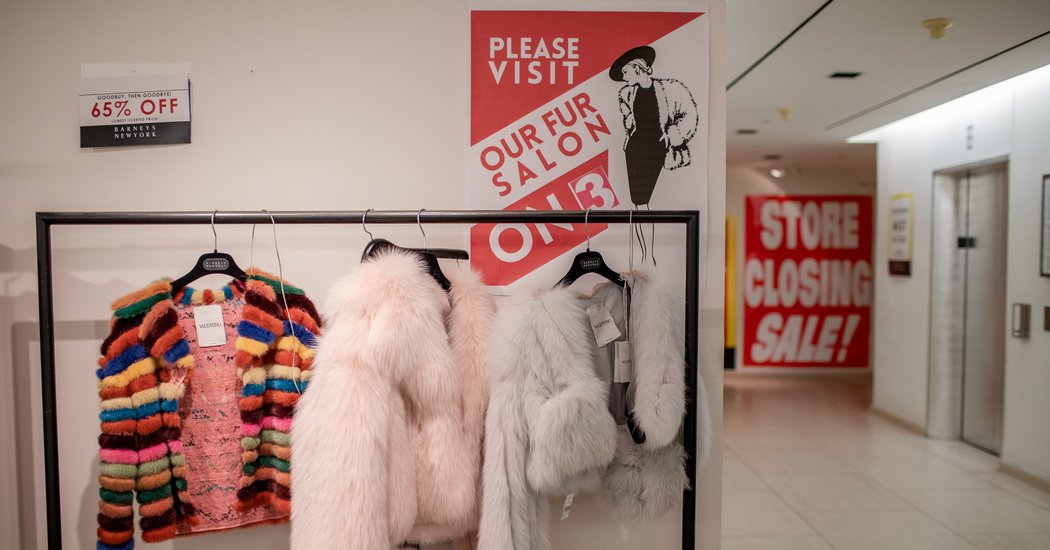 A job at Barneys New York once represented a glimmering opportunity in a challenging retail landscape — the kind of chain where sales associates might work for decades, earning competitive salaries as well as commissions, while honing expertise in fine jewelry and designer apparel.

But that reality evaporated soon after Barneys filed for bankruptcy last year and liquidation specialists took over its stores. Since November, employees at Barneys’s flagship at Madison Avenue and 61st Street have been in limbo, lacking basic information about the store’s closing date, severance pay and their benefits.

Paychecks were delayed this month after what a company email said was a “cyber incident,” further stressing employees, who don’t know if their personal information was compromised.

Many of the concerns were detailed in a letter filed on Tuesday to the judge overseeing the bankruptcy case from employees who have worked at Barneys for more than 20 years.

Their worries are not only financial. The letter noted that security at the store has been lacking. Employees said in interviews that the bathrooms were dirty and that the television in the break room had stopped working. At one point, employees were sharing a single microwave, down from four, for meals. They were warned not to steal as the liquidation started.

“We hope that making the court aware of what has been happening in what has become a disastrous execution of the liquidation and our well-being will help in some way,” said the letter by the group, led by Anthony Stropoli, a sales associate who joined Barneys in 1997. The letter said that the liquidation firm, Barneys’s remaining management and the workers’ union had been unable to answer their inquiries for a month.

Barneys responded in a separate filing, and said it had only about $2 million to pay $4 million in severance obligations. Of that, $800,000 has already been paid out.

While the $2 million was negotiated when Barneys was sold, the shortfall was not disclosed in public court filings. Five current employees, who spoke on the condition of anonymity because they were still hoping to receive severance pay, said the shortfall was also not disclosed to Barneys workers. They said the prospect of severance pay was the reason many employees have continued working since the bankruptcy sale.

Barneys added that it did not expect the firm liquidating the remaining seven stores, B. Riley Financial’s Great American Group, to hit sales targets of at least $303 million, which would have resulted in an infusion to the severance fund of at least $2 million. Great American is not in charge of administering employee severance, pensions or benefits, according to a company representative.

Before the liquidation started, Barneys employed about 2,300 people, 2,100 of them full time. The remaining seven stores, according to the company, are expected to close on or before Feb. 29, while the restaurant Freds will most likely close by Jan. 31.

Barneys’s employees — some with decades of experience — are the latest workers to be squeezed by the churn of retail bankruptcies, as businesses struggle to keep up with the shift to e-commerce and grapple with poor management and disastrous private-equity deals. Already this year, Opening Ceremony, the high-end fashion retailer, said it would close its handful of stores, and Pier 1, which has been bleeding cash, said it would shut up to 450 of its locations.

When bankruptcies result in major liquidations, as has happened at notable retailers like Payless ShoeSource and Toys ‘R’ Us, workers often end up participating in what is essentially the death march of their stores. The white-collar firms managing such exits need the employees for orderly transitions; many workers stay for promised payments, out of a sense of loyalty or because they are not yet sure of their next move.

“You have to understand, there are people who worked for decades there, built a clientele and this actually helped build Barneys,” Mr. Stropoli said in a phone interview, emphasizing that he spoke on behalf of a much bigger group. “They need to know: Will I be out of a job the 15th, the 10th, the 8th?”

The severance pay is also significant as workers look for new jobs, which may not pay as well as their positions at Barneys or require the same expertise.

“It’s harder because I’m competing with about 400, 500 people from my building probably for the same job,” said Frank Elbling, a sales associate at Barneys for 16 years, who has started to send out job applications.

“I’ve had some interviews over the phone and they want to offer around 30, 40 percent less pay,” he said, adding, “I can’t afford to do that.”

The New York-New Jersey Regional Joint Board, which represents more than 600 Barneys employees, said it was filing claims with the bankruptcy court on behalf of members, in the hopes of extracting more severance pay.

“The union has been in contact with representatives of both Barneys and the buyers to try to obtain as much information as possible so we can report it to our members,” Julie Kelly, general manager at the union, said in an email. “Unfortunately, Barneys has not provided clear information as to how much money will be available to pay severance claims.”

She also said that nonunion employees might not have any right to severance.

Despite a desperate search for alternatives, Barneys was sold in two parts in a $271 million deal last October. Its intellectual property went to the licensing firm Authentic Brands Group while its assets were bought by B. Riley. Store closing sales quickly started at the five full-price Barneys stores, two outlets and online.

The unusual deal has made it difficult for employees to know where to direct questions. Barneys still has its own management team in place, though the company’s chief executive, Daniella Vitale, left almost immediately and took a job as chief brand officer of Tiffany & Company. (Ms. Vitale earned about $1.3 million between August 2018 and July 2019, according to court filings.)

Barneys’s two stores in Manhattan are hardly recognizable these days. Employees said that Great American Group had brought in wares that were never sold at Barneys, including a large supply of rugs and merchandise with tags from Macy’s and Asos. Some have been relabeled and marked up, which can potentially be misleading for shoppers.

“Some of it is from similar vendors but it looks like they cleaned out some of their warehouses,” Mr. Elbling said, adding that there has been an influx of mysterious rugs and furs. “We don’t sell that kind of stuff.”

The representative for Great American said “the rugs and furs are supplementary inventory brought in to enhance the sale and generate additional customer traffic.” This person said that the firm did not purchase items from Macy’s or Asos for the sale.

When visitors walk into the Madison Avenue store, they are greeted by four televisions announcing the sale and garish store closing signs covering the walls. Many of the floors were virtually empty on a recent afternoon.

Some mannequins and display tables bear “sold” tags with the buyer listed as Saks. (Saks Fifth Avenue is licensing the Barneys name; the store’s website already directs users to the Saks site.) The downtown store was selling hardware like clamps for $3 last weekend.

Eon Huntley, who has worked in sales at Barneys for the past three years, said he found the lack of money for his colleagues, particularly those who had worked there for decades, to be “appalling,” especially given the role they played in recent months.

“They started the liquidation with very modest discounts so they were definitely reliant on associates and their clients and our relationships,” he said. “Knowing that, and knowing how people have spent their lives working and giving their time to this company, you’d think they would make sure there was something set aside for these people.”