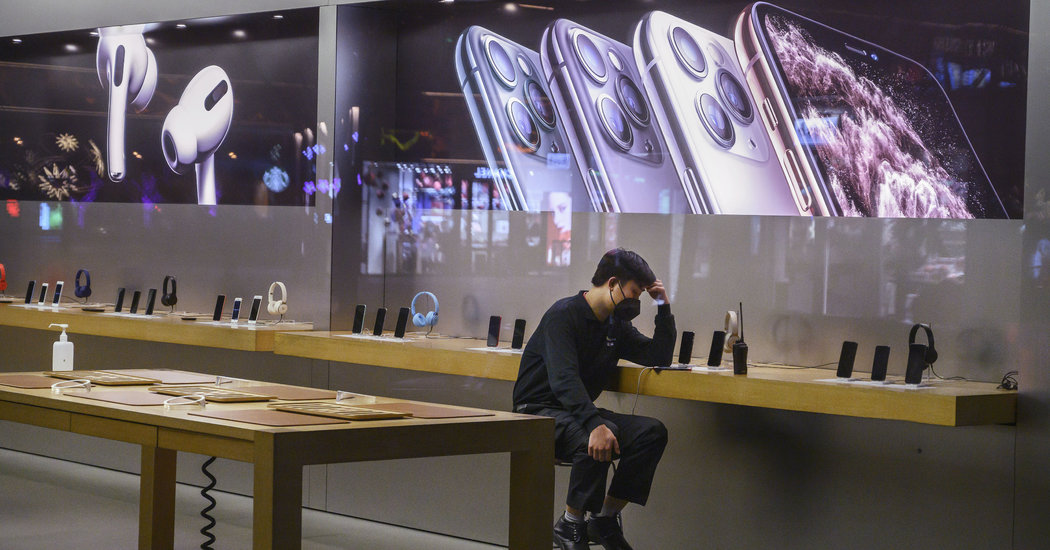 In 2002, when a lethal, pneumonialike virus known as SARS emerged in China, the country’s factories were mostly churning out low-cost goods like T-shirts and sneakers for customers around the world.

Seventeen years later, another deadly virus is spreading rapidly through the world’s most populous country. But China has evolved into a principal element of the global economy, making the epidemic a substantially more potent threat to fortunes.

International companies that rely on Chinese factories to make their products and depend on Chinese consumers for sales are already warning of costly problems.

Apple, Starbucks and Ikea have temporarily closed stores in China. Shopping malls are deserted, threatening sales of Nike sneakers, Under Armour clothing and McDonald’s hamburgers. Factories making cars for General Motors and Toyota are delaying production as they wait for workers to return from the Lunar New Year holiday, which has been extended by the government to halt the spread of the virus. International airlines, including American, Delta, United, Lufthansa and British Airways, have canceled flights to China.

China’s economic growth is expected to slip this year to 5.6 percent, down from 6.1 percent last year, according to a conservative forecast from Oxford Economics that is based on the impact of the virus so far. That would, in turn, reduce global economic growth for the year by 0.2 percent, to an annual rate of 2.3 percent — the slowest pace since the global financial crisis a decade ago.

Returning from a long holiday for the first time since the coronavirus’s threat became clear, Chinese investors sent shares in China down about 8 percent on Monday. Stock markets around the world have plunged in recent days as the sense takes hold that a public health crisis could morph into an economic shock.

In a sign of deepening concern, China’s leaders on Sunday outlined plans to inject fresh credit into the economy. That will include a net $22 billion to shore up money markets as well as looser borrowing terms for Chinese companies.

Though China’s factories still produce a mind-bending array of relatively simple, low-value products like clothing and plastic goods, they have long since achieved dominance in more advanced and lucrative pursuits like smartphones, computers and auto parts. The country has evolved into an essential part of the global supply chain, producing components needed by factories from Mexico to Malaysia.

China has also risen into an enormous consumer market, a nation of 1.4 billion people with a growing appetite for electronic gadgets, fashion apparel and trips to Disneyland.

The trade war waged by the Trump administration has prompted a partial decoupling of the United States and China, the two largest economies on earth. Multinational companies that have used factories in China to make their wares have sought to avoid American tariffs by shifting production to other countries — especially Vietnam. The coronavirus might accelerate that trend, at least for a time, should global companies find themselves locked out of China.

The outbreak of the virus in Wuhan, a city that is home to 11 million people, prompted the Chinese government to effectively quarantine the metropolis and much of surrounding Hubei province, barring people from moving around.

Until now, the impact on factories was limited by the fact that the outbreak was unfolding during the Lunar New Year, the most important holiday of the year. Many businesses are closed during the holiday, while hundreds of millions of migrant workers return home to their families in the countryside.

In a bid to keep people home and halt the spread of the virus, the government extended the holiday through Sunday, adding three days. But the fear of the virus is so widespread and intense that many workers are likely to remain away from factory towns this week.

A frightening epidemic coinciding with a major holiday will almost certainly spell a substantial loss of sales for China’s tourism and hospitality industries. Hotels and restaurants that would normally be full of revelry are empty. Concerts and sporting events have been canceled. IMAX, the large screen film company based in Toronto, has postponed the release of five films it had intended to showcase in China during the holiday.

Even as the holiday officially ends, business is unlikely to return to normal. Many major industrial areas — including Shanghai, Suzhou and Guangdong province — have lengthened the holiday by at least another week, preventing workers from returning.

With flights to China limited and emergency public health restrictions in place, the Chinese operations of multinational companies are likely to be constrained. Major banks, including Goldman Sachs and JPMorgan Chase, are directing that employees who have visited mainland China stay home for two weeks.

General Motors last year sold more cars in China than in the United States. Its Chinese factories will be closed for at least another week at the request of the government. Ford Motor has told managers in China to work from home while its factories remain idled, said a company spokesman.

All of this could play havoc with businesses that depend on China for components, from auto factories in the American Midwest and Mexico to apparel plants in Bangladesh and Turkey.

If customers cannot buy what they need from China, Chinese factories could, in turn, slash orders for imported machinery, components and raw material — computer chips from Taiwan and South Korea, copper from Chile and Canada, factory equipment from Germany and Italy.

“This could potentially disrupt global supply chains,” said Rohini Malkani, an economist at DBRS Morningstar, a global credit rating business. “It’s too early to say how long it is going to last.”

Similar worries accompanied the outbreak of SARS in 2002 and 2003, when the virus emerged in the southern province of Guangdong before spreading across China and around the world, killing nearly 800 people in at least 17 countries.

China had just joined the World Trade Organization, gaining access to markets around the globe. It was harnessing its seemingly limitless supply of low-wage workers to produce cheap consumer goods. Its economy centered on exports. Its consumer market remained in its infancy.

In the years since, China’s annual economic output has multiplied more than eightfold, to nearly $14 trillion from $1.7 trillion, according to the World Bank. Its share of global trade has more than doubled, to 12.8 percent last year from 5.3 percent in 2003, according to Oxford Economics.

Its economic output per person has multiplied to roughly $9,000 last year from about $1,500 in 2003, giving households additional cash for an enormous range of consumer goods.

“China today accounts for about one-third of global economic growth, a larger share of global growth than from the U.S., Europe and Japan combined,” Andy Rothman, an economist at Matthews Asia, an investment fund manager, noted during recent testimony before a congressional panel.

The American semiconductor industry is particularly entrenched in China, which is both a major manufacturing hub and a market for its products. Intel’s customers in China accounted for about $20 billion in revenue in 2019, or 28 percent of its total for the year.

Qualcomm, the dominant maker of chips for mobile phones, is even more dependent on China, drawing 47 percent of its annual revenue — or nearly $12 billion — from sales in the country.

No one knows how long the coronavirus outbreak will last, how far it will spread, or how many lives it will claim. It is impossible to calculate the extent to which it will disrupt China’s economy. But China’s formidable stature in the world economy means that the impact of the current outbreak is likely to substantially exceed that of SARS.

“The knock-on effects for the global economy are going to be much larger than they were,” said Nicholas R. Lardy, a China expert at the Peterson Institute for International Economics in Washington.

For manufacturers, the timing of the outbreak may limit the damage. They just completed the fourth quarter, when production increases to meet demand for the winter holidays. The end of January is typically slow.

But the effects of the virus on supply chains, which have grown notoriously complex, are difficult to anticipate. A single part of an advanced product like a smart TV may be made of dozens of smaller components, with each of these assembled from other pieces. Companies themselves often do not know the suppliers that are three and four rungs down the chain.

“If you run out of widgets that are essential to production processes and all those widgets come from China, then it may well be that your production lines go to a halt,” said Ben May, global economist at Oxford Economics in London. “These problems are likely to be popping up all over the world.”

This became a problem in the aftermath of the 2011 earthquake and tsunami in Japan, which devastated manufacturers. Many companies assumed they were buying parts from a diverse range of suppliers, protecting them from shortages, only to realize that critical components were produced by single plants.

If that plays out in China, the consequences are likely to be great.

“We’re talking about a potentially vast swath of a country that the whole world depends on as a manufacturing workshop,” said Susan Helper, an economist at Case Western Reserve University and the former chief economist at the Commerce Department. “The effects will be unexpected.”

Apple assembles most of its products in China. The company has severely restricted travel in China for its employees, its chief executive officer, Timothy D. Cook, said on an earnings call on Tuesday.

Apple disclosed much wider volatility in its potential revenues for the current quarter in the face of uncertainties around factory production and sales of its products.

Those uncertainties deepened on Saturday. Apple, which derives about one-sixth of its sales from China, announced that it would close its 42 stores in the country.

Walmart buys vast volumes of its products from Chinese factories while operating 430 stores in the country, including in areas shut down by quarantine. The company has reduced hours at some stores, a Walmart spokeswoman said.

“We may still be in the early stages,” of the coronavirus crisis, Judith McKenna, who runs Walmart’s International business, wrote in an internal memo on Friday.

China is the world’s largest manufacturer of toys. At the International Toy Fair in Nuremberg, Germany, many Chinese suppliers expressed confidence that their factories would soon reopen, said Rick Woldenberg, chief executive of Learning Resources, a family-owned manufacturer of educational products and toys in Illinois.

“But no one’s quite sure how much of this information can be relied upon,” Mr. Woldenberg said.

Because of the trade war, the toy industry was effectively prepared for a moment in which its access to Chinese suppliers was imperiled, Mr. Woldenberg said. In December, when the Trump administration was threatening to impose an additional 15 percent tariff on Chinese imports, many toy companies sped up their orders to beat the deadline. Some shifted production to Thailand and Vietnam to avoid the tariffs altogether.

Toymakers will soon need to rebuild inventory. “If this goes on for four more months, we are talking about a big problem,” said Jim Silver, chief executive of TTPM.com, a consumer research site.

After SARS, China suffered several months of economic contraction and then rebounded dramatically. That might happen this time, too. The only certainty is this: Whatever happens in China will be felt widely.

“Clearly China has become a much more dominant player in the world economy,” said Mr. May of Oxford Economics. “It’s just so much more involved in the global supply chain. Over the last decade, it has been the spender of last resort for the global economy.”