Postmates said that it will be creating a fund to cover the costs for doctor appointments and medical expenses related to the COVID-19 outbreak for its delivery fleet and for merchants, Postmates will waive commission fees for stores in impacted markets.
The goal, the company said, is to give small … 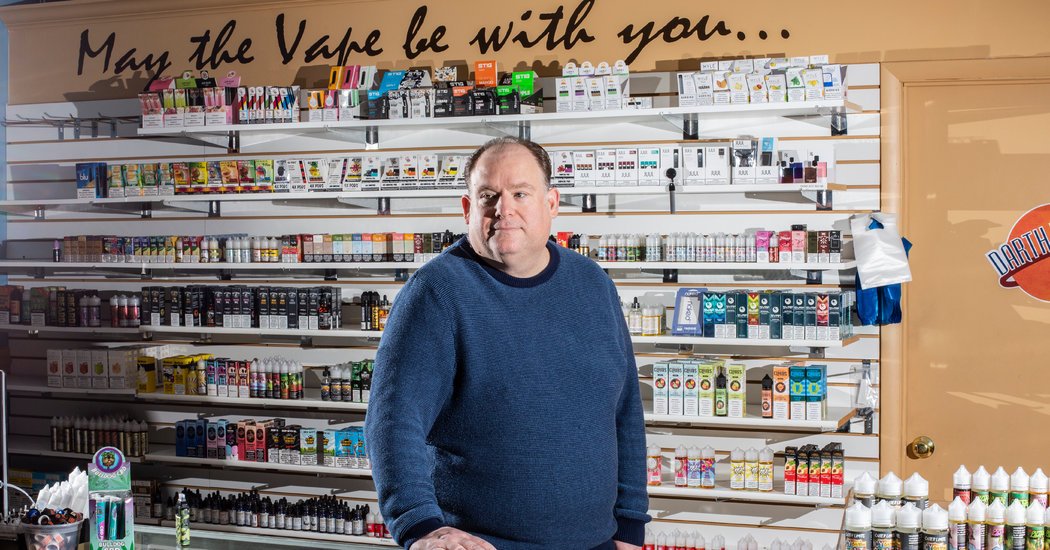 Before long, Mr. Mitrani, 48, had a second store in New Jersey and one in New York. Business was brisk, he said, and he was optimistic that offering smokers an alternative to tobacco would help him coast into retirement within 10 years.

Instead, he is shutting down one of his New Jersey stores at the end of the month and preparing to stock the very item he has spent years helping customers quit — tobacco — in the other.

Darth Vapor, like roughly 270 similar shops in New Jersey, is filled almost entirely with products that will be illegal to sell in the state by mid-April.

Faced with growing fear about the risks of vaping, New Jersey last month became the second state to adopt legislation outlawing all nicotine vaping liquids other than those flavored to taste like tobacco.

It has banned all fruit- and menthol-flavored e-cigarettes and cartridges, which are popular with teenagers, as well as most nicotine-infused liquids that are used in larger, hand-held vaping devices and are commonly sold in vape shops.

Under New Jersey’s new law, Darth Vapor’s rows of disposable e-cigarettes, menthol Juul pods and flavors with names like “God Nectar,” “Joy on the Off Ramp” and “Apple Cinnamon Donut” must be gone by April 20. Only a handful of tobacco-flavored products can remain.

“How does a whole store that pays employees and rent survive on five flavors of tobacco?” Mr. Mitrani said. “The answer is it can’t.”

Many shop owners say they are selling off as much inventory as possible, operating on month-to-month leases and preparing to close. Others are making plans to sell pipes, tobacco products, CBD oil and kratom, an herbal supplement that the Food and Drug Administration has said can be dangerous, to try and stay afloat.

New Jersey’s move is part of a flurry of government action aimed at slowing the alarming rate of vaping by teenagers. Vape shops nationwide are grappling with F.D.A. restrictions on flavored e-cigarette cartridges that took effect this month.

More than five million youths — one in four American high school students and one in 10 middle school students — now vape, according to the National Youth Tobacco Survey released last summer. And across the nation, the sale of electronic cigarettes has become big business, climbing to $3.6 billion in sales last year, up from $1.5 billion in 2014, according to an industry report.

Massachusetts adopted legislation similar to New Jersey’s in November after hundreds of people nationwide, many of them young men, were hospitalized over the summer with a mysterious vaping-related lung illness that as of late January had killed 60 people.

The Centers for Disease Control and Prevention has said the lung disease is “strongly linked” to vitamin E acetate, an additive in some products used to vape THC, the high-inducing ingredient in marijuana.

Many shops in Massachusetts have undergone a metamorphosis similar to the ones stores in New Jersey are now considering: Close, or rebrand with a new inventory.

Some states, including New York and Michigan, tried to temporarily stop the sale of flavored vaping products through executive orders, but lawsuits stalled those efforts.

Cities like New York and San Francisco have outlawed many vaping products on their own.

New Jersey’s law goes well beyond the new federal rules, which ban the sale of fruit- and dessert-flavored e-cigarette cartridges, or pods, that are placed in slim penlike devices, vaporized by a heated coil and smoked. Menthol cartridges are still permitted under the F.D.A. guidelines. The federal rules also gave vape shops a lifeline by continuing to permit the sale of a staple product: liquids used in open-tank systems.

Supporters of New Jersey’s ban say flavors are especially popular with teenagers, and that any reduction in access to flavored nicotine will slowly drive down usage.

“Vaping is a health issue — not just for young people,” said Karen Blumenfeld, director of Global Advisors on Smokefree Policy, an advocacy group based in Summit, N.J.

“Getting flavored vaping products off the market will protect our youth,” Assemblyman Herb Conaway, a physician who was among those who sponsored the legislation, said in a statement. “If we don’t, we will have another generation of young people addicted to nicotine.”

The law, they say, penalizes adults who turned to vaping as a way to quit smoking tobacco, which each year causes diseases that kill seven million people worldwide, including about 480,000 people in the United States.

A study by the New England Journal of Medicine released last year found that e-cigarettes were nearly twice as effective as other nicotine replacement products, like patches and gum, for quitting smoking.

“Every smoker who does not quit because of a lack of availability of flavors is a public health failure for the state of New Jersey,” said Gregory Conley, president of the American Vaping Association, a pro-vaping advocacy group.

Mike Moran, the owner of two Firehouse E-Cigs and Vapors shops in southwest New Jersey, said he was planning to close both his stores and move out of state. Vape shops, he said, are being unfairly blamed for a public health scare over an illness that is believed to be primarily linked to vaping THC.

The American Heart Association had argued that the legislation did not go far enough, and should have included a complete ban on all vaping flavors and tobacco and menthol cigarettes. An effort to end the sale of menthol cigarettes in New Jersey stalled in the Legislature.

Gov. Philip D. Murphy, in a memo, called the new law “a necessary step to address the vaping epidemic among our state’s youth.”

But the Democratic governor vetoed a related bill that would have raised the fines for selling vaping or tobacco products to people younger than 21, required age verification scanners at stores and capped the legal concentration of nicotine in vaping liquids sold in New Jersey at 2 percent.

The nicotine requirement would have effectively pushed reusable Juul e-cigarettes out of the New Jersey market unless the company created a product with lower levels of nicotine, a highly addictive drug.

Juul Labs, a Silicon Valley start-up that has dominated the youth vaping market, is partially owned by Altria, one of the world’s biggest tobacco companies, which sells Marlboro and other cigarette brands.

Assemblyman John J. Burzichelli, a Democrat, opposed the flavor ban legislation, saying it would hurt small businesses without making a significant dent in what he agreed was a crisis in teenage vaping.

He also said he was disappointed that Mr. Murphy vetoed the nicotine-cap legislation. The governor’s veto memo called it “a piecemeal approach,” and aides cited complications with the bill’s requirements for taxing and tracking tobacco sales.

Zack Lloyd, 21, said he started smoking cigarettes when he was 13. About three years ago, desperate to quit, he began using tobacco-flavored Juul e-cigarettes because they were closest in taste to what he had been smoking.

But after getting hooked on flavored products, Mr. Lloyd, who lives in the state’s northernmost county, Sussex, said he would never return to tobacco cigarettes — or tobacco-flavored vapes.

“No way,” he said on a recent afternoon while buying a pack of pink-lemonade flavored Mylé mini disposable e-cigarettes, a product he said he will try to buy online after the ban takes effect. “It is going to be annoying not to get it at a store.”